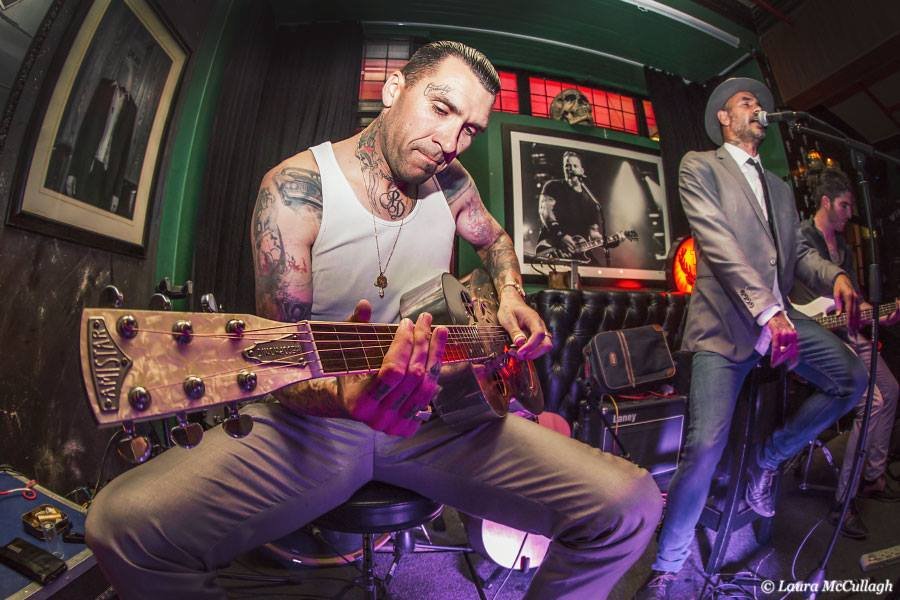 Bluesy folk music has always had a special place in the landscape of the South African music scene. It is also a place that is placed somewhat out of the limelight that is granted to the indie rock bands that dominate the scene. Our editor, Craig Roxburgh, sent the Johannesburg-based folk outfit, Gunshot Blue, a couple of questions to answer regarding the history of the band, the state of the music industry, and their various influences.

From what I gathered from your Facebook biography, there is a particularly interesting story behind Gunshot Blue. For those who don’t know, could you guys give the history behind how Gunshot Blue came into existence?

I was at a place called Go-Go Bar ( unfortunately it’s not around anymore. It was fookin cool). This girl, quite easy on the eye I must admit, wanted to show me the latest ink on her skin. It was on her lower back. I thought, please god let it not be a tramp stamp. My prayers were answered. It was something delicate, elegant and beautiful . Suited her perfectly. Damn I shouldn’t have let her slip. Anyway, back to your question. It was pretty enough that I wanted to know which artist did it… As I was tired of flying down to [Cape Town] to feed my ink-on-skin addiction and looking for a someone new in Joburg it was a welcome change of plans and that ‘s how Pepi and I met.

Five years later after many sessions under many needles at SA Hardcore Tattoos I get a call from Pepi. He wants to talk about something. We go for a beer. Or an espresso and grappa. Or all of the above.  I listened as he told me about this new direction he wants to go in. Would I be keen to jam with him.  I was curious to see where it will lead. And knew Pepi wouldn’t do anything half measured, so I jumped on that boat…

Where did the name “Gunshot Blue” come from?

You know when you slam your finger in the car door…

Both of you were previously in other bands that eventually dissipated into being footnotes in the South African music scene. Has this altered how you guys went about approaching the creation of Gunshot Blue?

Like the wiseman of Ecclesiastes said, there is a time for everything. Maybe this is a time of approaching things more organically, personally, intimately.

With that in mind, you guys are pretty well-acquainted with the South African music scene, and especially the darker underbelly of the music scene. What are your thoughts on how far the music scene has come in recent years, and where it stands today?

More international acts are gracing our shores. So that’s exciting for the listeners and fans. But unfortunately in our beautiful country politics, sports and I am sad to say consumerism over shadow the arts… Sometimes it feels like a brand catwalk at the local festivals. Personally I feel we have regressed. It seldom feels like it’s about the music

If you could change anything about the music scene, what would it be?

Bringing it back to the band, how would you guys describe yourself as a band?

Gunshot Blue seems to draw on a lot of folk and blues influences. What are some of the artists and things that influenced you to pursue such a musical direction?

Go further up the mountain. Swim deeper down the river. Uplift more spirits .

Finally, if you could share the stage with any band or artist – who would it be?

Do they have to be alive? Bruce Springsteen or Bob Dylan.
Otherwise anyone of the old blues masters listed in 7.