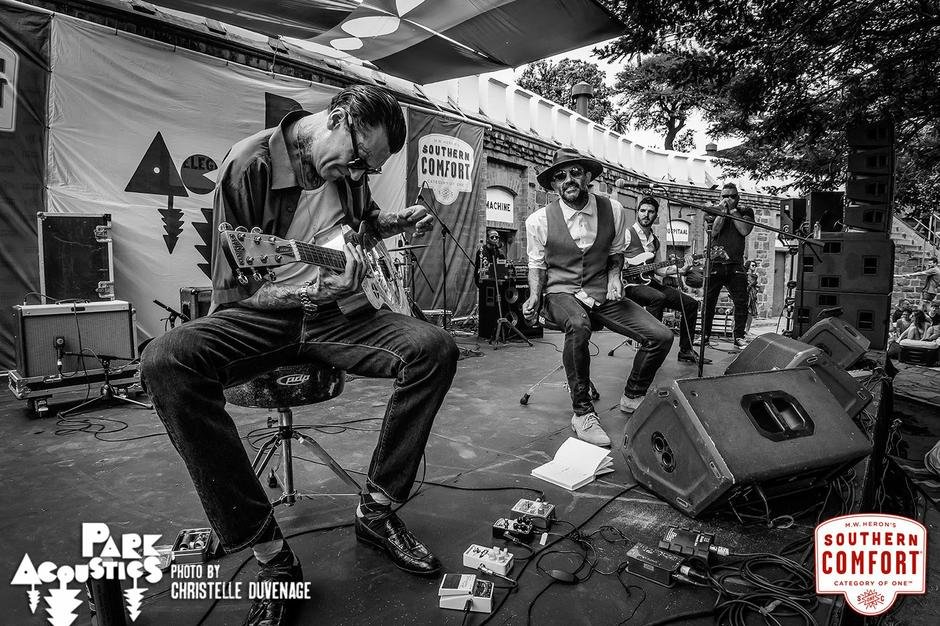 This Sunday is the first Park Acoustics event of the year and the line up is super hot. One of the acts hitting the stage in Pretoria this weekend is 4-piece folk blues bank GUNSHOT BLUE. We got to chat with the guys ahead of the event, this is how it went down:

Biography:  That whiskey in your hand would have no flavour if it wasn’t for the years in those french oak flame charred wooden casks. Gunshot Blue is the culmination, fermentation and distillation of many roads, towns, jobs, houses, hard work and more stories all soaked up in one barrel. Gunshot Blue is a two piece Gentle Folk Blues act from Johannesburg, South Africa with Pepi Dimevski ( Bloodline ltd, Last Bout) on guitar and Frans Borman ( Jet Black Camaro) on vocals. Their paths crossed about five years ago when Frans was tired of flying down to the Mother City to feed his ink-on-skin addiction and looking for an artist in joburg to fill the shoes. Exploring their musical landscape you’ll be welcomed to the wholesome country hospitality of a karoo farm kitchen, warm your hands to old school folk tales around a winter camp fire and enjoy the sweet taste of gently brewed coffee blues.

Hey guys, how you doing? Before we get started, can you please introduce us to the members of Gunshot Blue,  tell us who plays what part in the band and also a short background on how you guys met to form Gunshot Blue?  On guitar we have Pepi The Macedonian King Dimevski. On drums Wayne The Italian Stallion Pictor. On bass Kevin The Irish Viking Hughes and on vocals Frans The Farmer Borman. Pepi has been tattooing Frans since 2009, they started jamming together in 2014. A few moths later the duo realised the addition of bass and drums would flesh out the rhythm and beef up the blues. Wayne used to play with Pepi in Bloodline. Kevin’s brother, Tom Huges recorded Bloodline. That’s how all the dots connect. Can you give us a short background on the name Gunshot Blue? You’re about to drive somewhere, you and your crew, someone shouts shotgun and she gets the front seat.  Shotgun the blues, as in hijacking the genre but we like guns more than hijacking. so Gunshot. But that was not enough, it needed something else. It needed the moonlight, it lacked the sea. It wanted the sky, it asked for blue. Where do you guys take inspiration from in your “sound”? That stone in your shoe. That thorn in your side. That bone you want to pick with me.  The depths of hell. The heights from heaven. A woman’s gentle touch. How would you describe your “sound” in 5 words? Psychedelic African outlaw voodoo blues. What have been some of your highlights as a band thus far? Conversations after a show.  New friends you make. Small towns you discover on the road. FORR Fest in Mozambique was sublime. Collaborations with fellow musos. Being asked to play for a second time and a four year old knowing every word.  A stranger walking up to you. What are your thoughts on our local music scene at the moment and if there is anything you wish to see happen differently?  It’s tricky, sometimes you get a cool gig out of the blue, sometimes you try and try and dont get into that certain event/ festival/ venue for a couple of years. Sometimes it’s not what you know, it’s who you know. Sometimes the blood, sweat and tears pay off, but sometimes the hard work does not feel enough. You think maybe we do need a publisher/ promoter to get your name out there.It would be cool if there are more platforms for young blood. Platforms just focussing on raw talent, i.e emerging acts. Are there any local acts that you think need a special mention? Get your telescope out for Percy’s Perseverance. Richard Bruyns. Zephyr Heirs. You will be jamming at the first Park Acoustics event of the year, alongside Francois van Coke, Rambling Bones, Boxer and more… are you excited for this gig? What can we expect from you guys come the 5th Feb We’ve been wanting to play Park Acoustics for a while, it’s an honour to share the stage with such talent, personality and character. It’s a pleasure sharing the stage with friends. What to expect? Howling wolf. Raised from the dead, with an axe in his head. Dripping in diesel and set alight. There might be a guest joining us on … did that crow just caw harmonica. Anything that you guys are currently working on that we would be interested in hearing about? A 12 track album is in the birth canal. She should see the light mid/ end of March. Interview by Nos The Boss. Source: MixedApples